The ‘speeljacht’ was a hot ride: “Compare it with today’s motorcycle clubs” 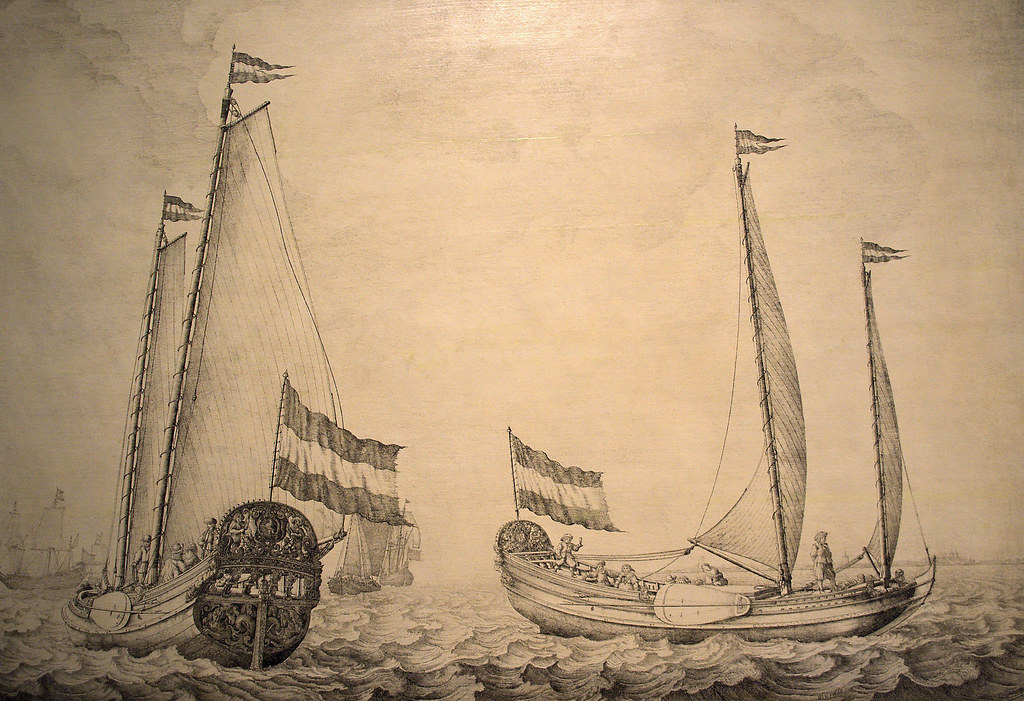 The pleasure yacht we build was quite something back in the days. A fancy yacht with a ‘beer house’ for the road, a showpiece on the water to impress your friends and competitors. “Compare it with today’s motorcycle clubs,” says naval historian Ab Hoving in this interview.

Anyone who has heard us talk about the speeljacht, the 17th century pleasure yacht we build, knows that this ship is an innovative ship in several respects. Certainly in the field of reinforcing waste plastic (PET) as a building material. But in its own time, this ship was also a special feature in itself. There are many great historical stories to tell about this yacht. And who can do this better than ‘our own’ naval historian Ab Hoving?

Ab is the former chief restauration of ship models at the Rijksmuseum and owes his career to the 17th century pleasure yacht. To be more precise: to a lecture about a model of this ship that landed him this job. He therefore knows everything about the speeljacht and provides us with information during the construction of our ‘Dufor’. And that makes for great stories!

Please tell, what makes this ship so special?

“It is one of the first pleasure yachts in maritime history. An image of the Egyptian king Tutankhamun fishing on the Nile on a boat has been found in the kings’ tomb. This is of course also a type of pleasure craft. But when the Dutch trade in South East Asia took off and Dutch merchants made money like water, special ship types were developed for the first time in history. Ships that were built entirely for the pleasure of the owner. That was unique.

At the time, ships were purely functional: for trade, fishing and transport. ‘Yachting’, a day of sailing with family, friends or business relations on the water, was something new. A few of the later more luxurious Dutch ‘staten yachts’ ended up in England. It is said that ‘yachting’ (watersports as a hobby) of which the English are still so fanatical about today, originated from this. That’s kind of our fault.”

Why was this innovative for the time?

“The ship was built for speed and flexibility. A new kind of rigging allowed for quick tacking and it was made to be as easy to operate as possible. The ‘lord’ probably steered the vessel himself every now and then, but he would definitely hire a skipper and a servant to operate this ship.

This ‘rod rigging’ was an innovative jump for the Dutch (see the image below). Instead of masts, it had two ‘rods’ (a type of unstayed masts). It is believed that this came into vogue after the first travels of the Dutch in Asia and presumably copied from the Vietnamese: they already used this on their ships. When the enormous growth in prosperity came in the Netherlands in the 17th century, wealthy merchants at home had their ships built in this way.”

What were those wealthy people doing on board? Just sitting, sipping beer?

“Sailing, good food, relaxing; it was really an outing with family or friends. Nicolaes Witsen (writer and VOC-chief) has indeed written about a ‘beer house’ under the aft deck. He makes no further announcements about this, but the function seems clear to me. Just like today, there was already a lot of consumption on the water.

But sailing was also a bit of a show-off: competitions were held with the pleasure yachts. In a painting in the collection of The National Maritime Museum in Amsterdam, a whole fleet of these yachts is lined up at the City Inn in the Amsterdam harbour: all the showpieces in a row. Compare it with todays’ motorcycle clubs: they gathered to show off their ship and sail together. It was a thing. But the pleasure yachts were probably also used to take their business relationships on the water to impress them.”

So the pleasure yacht was a hot ride, a showpiece!

“Most deifinitely. You can also see this in the decorative wood carvings on models and well-preserved shipwrecks. But the Netherlands was a Calvinist country, so you had to be careful there. With this decoration you were showing the world that you were doing well, without overdoing it. The carving mainly consisted of family coats of arms on the stern and the bow. Those weapons with a tree on it and two angels holding it. Chic, but not gaudy.

Recently I found a ship model of a horrible pleasure yacht with so much carving that it could hardly be Dutch. It appeared to be German. A Dutch ship would have a figurehead with a lion on it, designed in a simple and restrained manner. But the German one had a huge horse with a guy in full armor on it. No way that a Dutch merchant would put that on his ship. This German guy would be dismissed as new money: he doesn’t get it.”

How do you support Edwin in the construction of our speeljacht?

“I have supervised several replica projects and I always stay away from decision making. But I like to think along from the vision of the shipbuilders of the time and provide information to stay close to historical shipbuilding. A dilemma that arises now, for example: if you use a different material, you get different fastening constructions. How far do you deviate from traditional techniques?

When you join two wooden planks together, you caulk them to make it waterproof. With waste plastic, Edwin welds such a connection: “Is that possible?” Historically, I have no problem with that. Shipbuilding techniques and materials change over the years. If it walks like a duck and quacks like a duck, it’s a duck. The same with this ship.”

How do you view this experiment from your expertise?

“It’s extraordinary! Building a ship from waste plastic is also completely in line with the 17th century: back then everything was circular. They didn’t throw anything away. Clothing was completely used up and old rags were used to make paper. Whale vertebrae were used to pave a street. Moreover, as a former school teacher, it really appeals to me that you involve people who are now standing on the sidelines and in this way offer them a future perspective. Of all the replica projects I have been involved in, this is by far the most remarkable.”